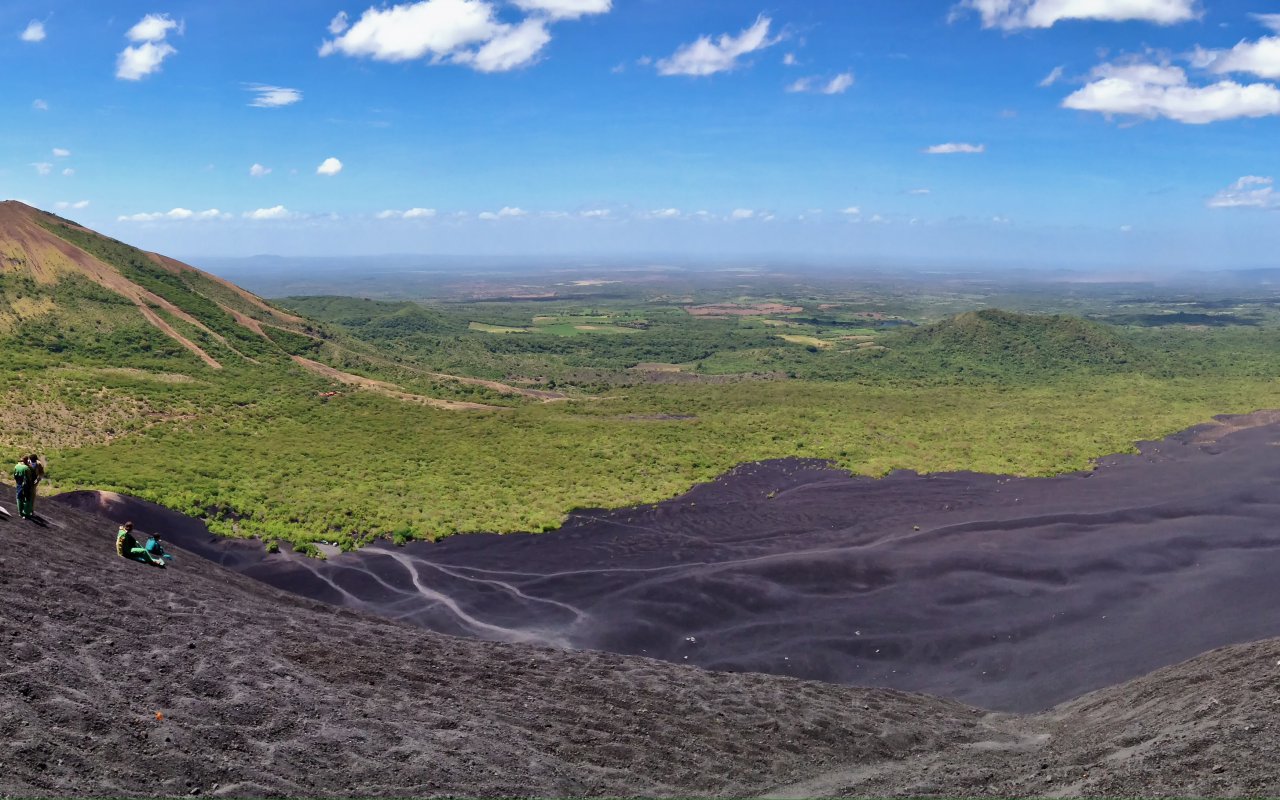 The Maribios mountain range located in the west of the country, near the cities of León and Chinandega, is composed of some lagoons of volcanic origin, the Asosoca and Monte Galán, and the following main volcanoes : San Cristóbal, El Chonco, Casita, Telica, Santa Clara, Rota, Cerro Negro, El Hoyo and Momotombo.

The Black Mountain, Cerro Negro is a unique and young volcano!

Born just over 150 years ago, the Cerro Negro volcano is the most active volcano in Nicaragua. It has recorded about twenty eruptions, the most recent of which occurred in 1999, during which two small craters formed.

725 meters high, its slopes are quite steep, without vegetation, in stark contrast to its environment, and covered with a layer of ash and black volcanic rocks, hence its name Cerro Negro, black hill.

The ascent is accessible to all. It is done through a clearly identified path made of black volcanic rocks. It takes about an hour to reach the summit and to be able to observe the craters from which fumaroles and other sulfur emissions escape.

The view from above is magnificent. One can observe its lunar-looking surroundings, the panorama of the city of León and its beautiful white cathedral, the Basílica Catedral de la Asunción, as well as the volcanoes, such as Telica and San Cristóbal, of the Maribios volcanic chain that crosses several departments of Nicaragua. 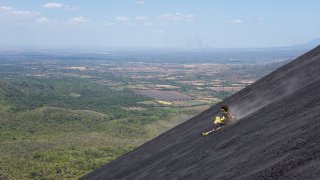 The descent is much easier than the ascent. It is done on one of the steepest slopes where there is only volcanic sand. You will have the choice between hiking trails or sledding down on a wooden board specially designed for this experience. Legend has it that a foreigner living in León had this idea with his coffee table. Speed and sensations guaranteed!

Since 2015, an 830-meter treetop adventure course with 7 platforms and a 17-meter suspension bridge has been installed at the foot of the Cerro Negro to go directly to the reception of the nature reserve. 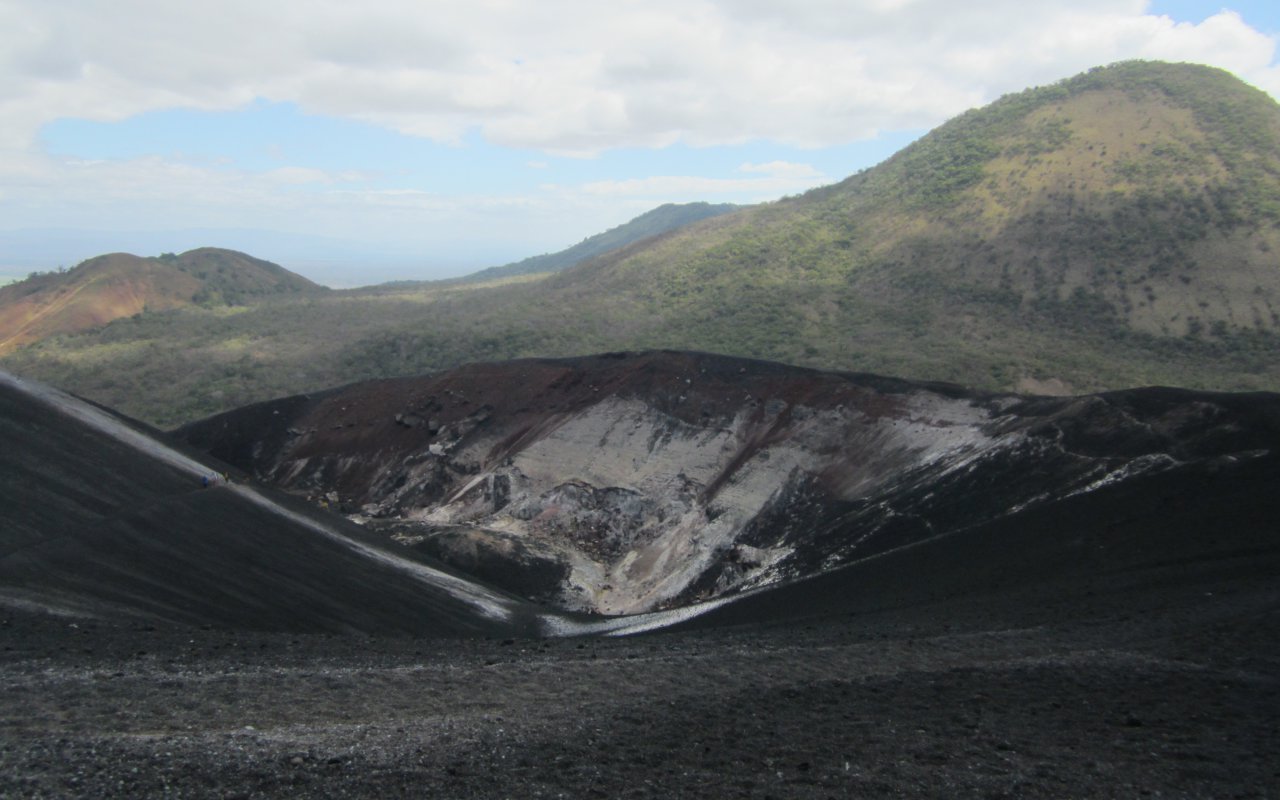 El Hoyo is the most important active volcano in a series of volcanic formations including Las Pilas volcano, Asososca lagoon and Malpaisillo lagoon.

Its summit culminates at 1,050 meters above sea level. It is distinguished by a hole located on one of its slopes, instead of being located on the summit. Smoke still escapes from its crater. 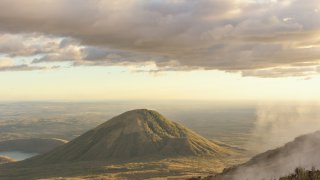 The Telica volcano is located 30 kilometers northeast of the city of León. It is one of the most active volcanoes in Nicaragua and has been erupting regularly since the arrival of the Spaniards emitting gas and volcanic ash.

Not far from there, in the small village of San Jacinto, volcanic manifestations such as hot springs and smells of sulfur can be observed. These are the Hervideros of San Jacinto. Many legends and myths surround this timeless place.

It is often the starting point for excursions on foot or on horseback to the crater of Telica, with the possibility of camping at its summit for the night. A great adventure!

The beginning of the ascent of the volcano is a difficult and tiring hike of 3 or 4 hours depending on your rhythm via small paths of stone and volcanic sand. You will have the chance to see more fumaroles and projections of the volcano. The last hour of ascent before arriving at the crater is easier and offers various beautiful viewpoints on the surroundings.

At the top, the view into the crater and the bubbling lava is spectacular. In order to enjoy this spectacle all night long, it is possible to camp on the sides of the crater accompanied by a guide. At the first dawn of the day, the sunrise over the valley and the Maribios volcano chain is breathtaking when the sky is clear.

The descent is done quietly in a few hours, accompanied by an incredible view of the surrounding volcanoes ! 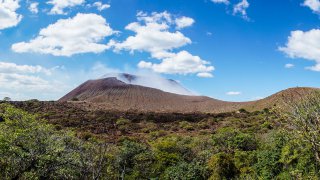 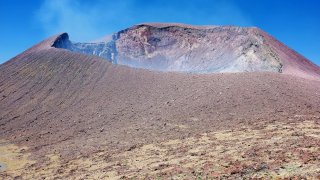 On the road between Managua and León, your gaze will inevitably fall on the Momotombo volcano located on the north shore of Lake Managua, Lake Xolotlán. Its almost perfect conical shape culminates at an altitude of 1,258 meters.

It is at the foot of the Momotombo volcano that the Spaniard Francisco Hernández de Córdoba decided to erect the first colonial city of León in 1524, León Viejo. But the violent eruption of 1610 completely destroyed the city and pushed the inhabitants to move it to its current site about thirty kilometers to the west.

The ascent of the Momotombo volcano is difficult because of its steep slopes, the sand and volcanic stones that cover it and the access to the privatized site for which it is necessary to ask for an entry permit beforehand from the energy company that manages the geothermal power plant installed at the foot of the volcano.

The eight to ten hour trek is nevertheless largely rewarded by the discovery of a breathtaking panorama on the crater, the neighboring volcanoes, the city of León, the Pacific Ocean, and possibly if the view is clear, on the Masaya volcano and the island of Ometepe. 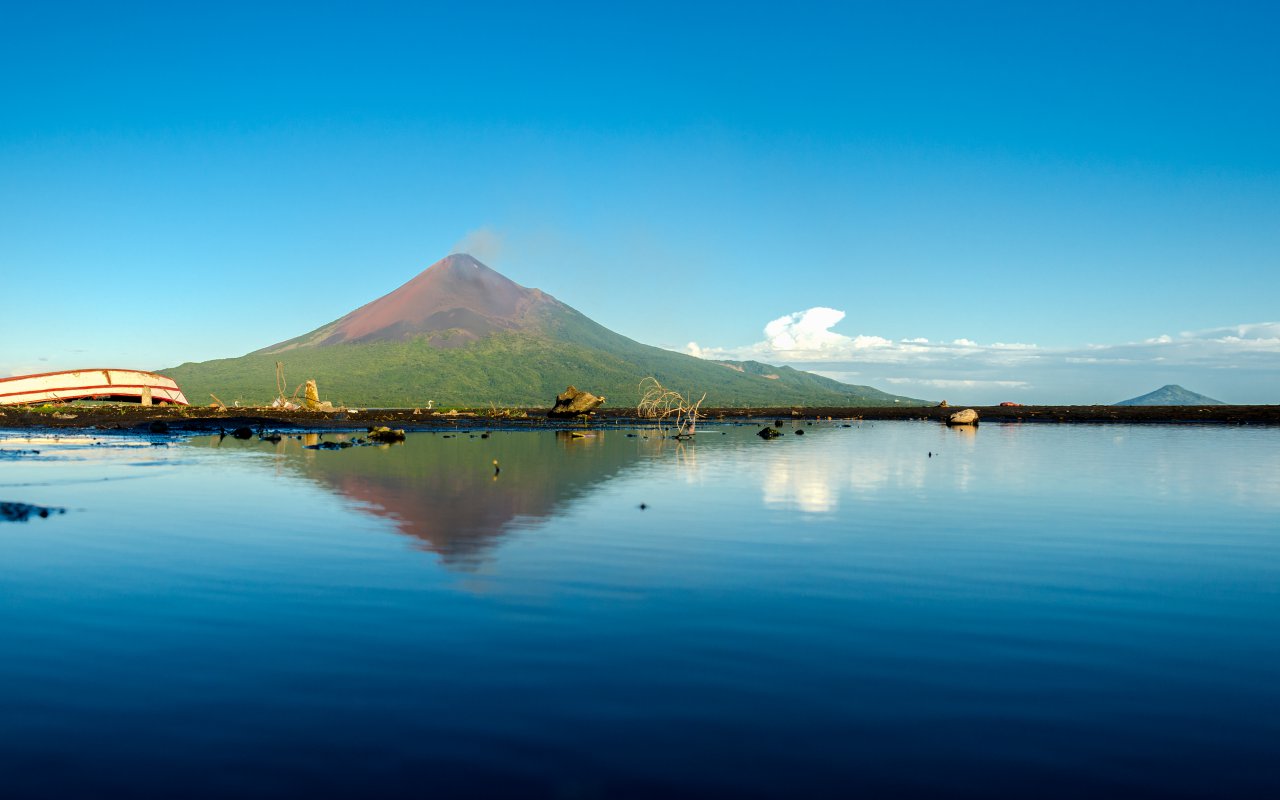 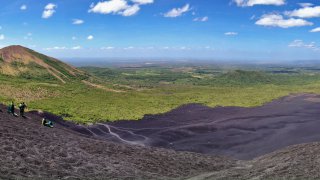