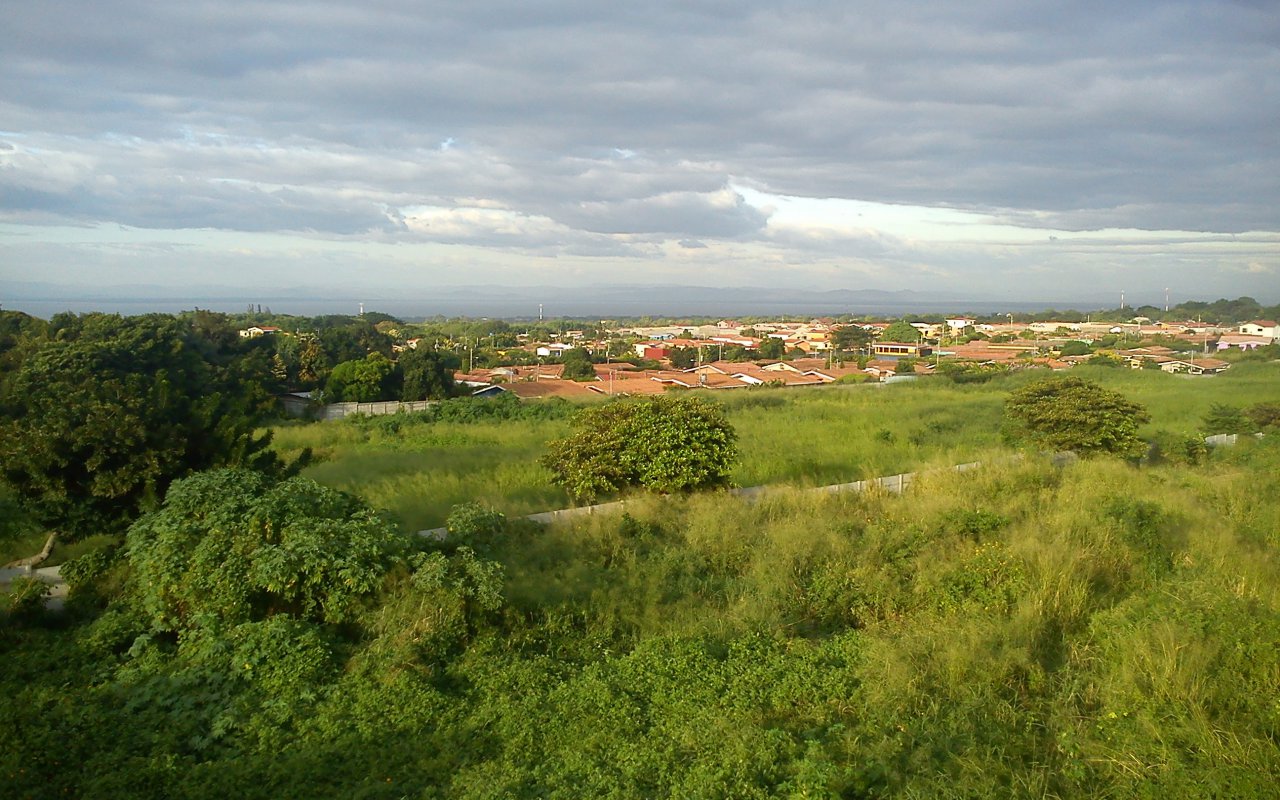 Located in a valley stretching from the mountains in the south to the lakeshore, Managua is the capital, a great capital, administrative and political center of the country. It is a city with its own personality, it has a special atmosphere, history has left its mark. Natural disasters too. Two earthquakes, the first at the beginning of the 20th century and the second in 1972, ended up really giving visitors the impression of passing through a hot city mess. There is no city center or old town as such. Some old buildings and an old cathedral will present themselves to you during the crossing of the city. It’s a real architectural chaos, you’ll come across modern residences and condominios, shopping malls but also real Latino barrios, local and rustic shops, bus terminals and big markets. Managua has the largest market in Central America. El Oriental.Hectares of stalls and stores spread out and offer you everything!

It is easy to get lost in this megalopolis, few signs and many roundabouts do not help to find your way around, but there are always good surprises after a red light: a mausoleum for the martyrs of the revolution or an old cathedral. Managua has its secrets and it takes time to discover them. 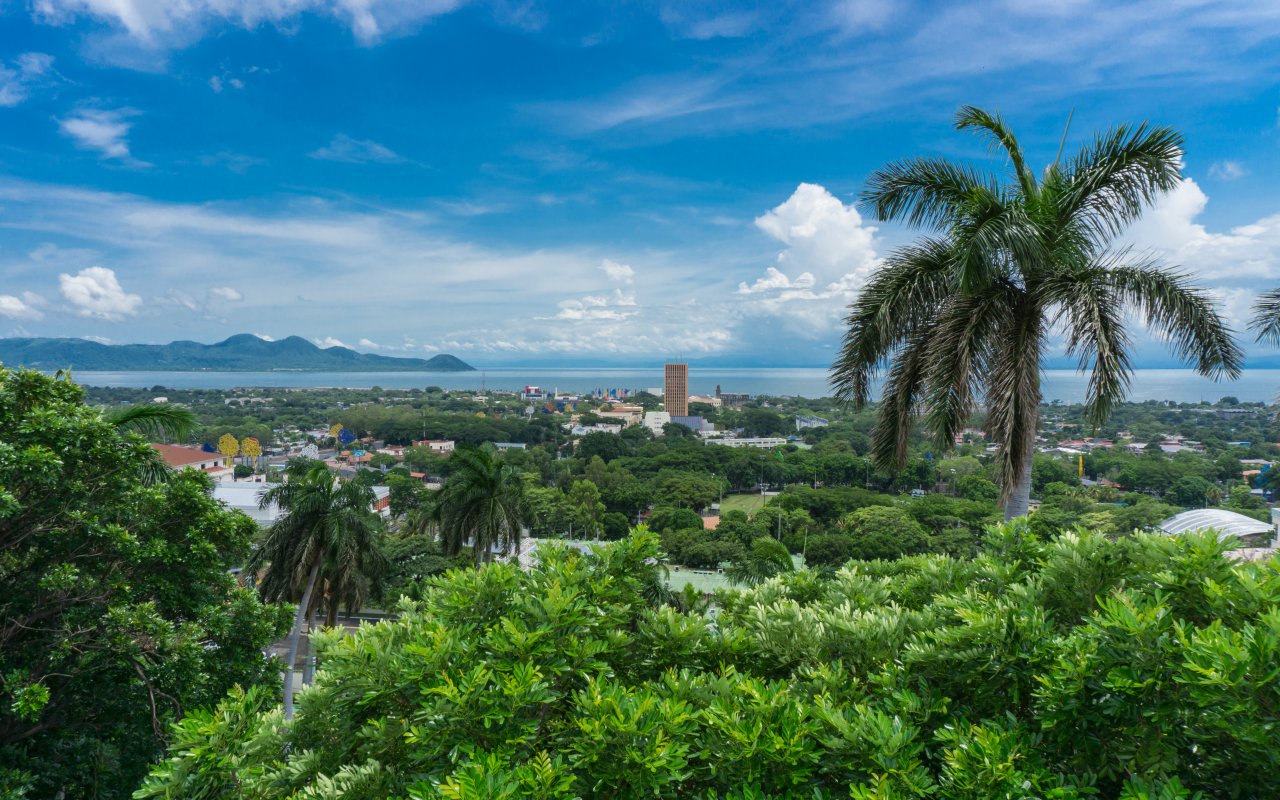 Managua is located in a valley near the shores of Lake Xolotlán, in the north. Barely a hundred meters above sea level, Managua, with its 540 km2 of urban area and 1.3 million inhabitants, is a green city. Few large buildings, a characteristic linked to the consequences of earthquakes, Managua is characterized by its expanse and surrounding hills, green valleys called las sierras de Managua, where it is cooler than the stifling center, with an average temperature of 27.5 degrees Celsius. 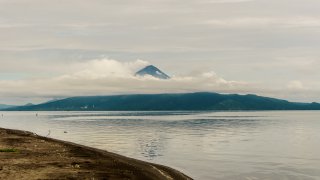 From Nahuati, an ancient local dialect, Managua would mean “where there is water”. For sure, Xolotlán lake or Managua lake has a considerable importance. From its shore, you can see the Momotombo volcano on the other side.

Managua lake is next to Nicaragua lake, it embellishes the city and gives a real air of freshness and marine atmosphere, some banks have been developed to facilitate the development of tourism business, new in Nicaragua. 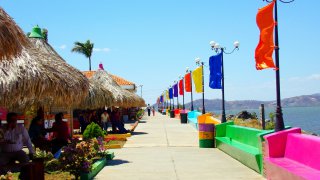 Managua’s growth has been rapid since national independence; its neighborhoods have quickly seen the growth of banks and other international franchises. The competition between Granada and León as the capital of the country also played its part, the non-victory of neither side propelled the city of Managua as the center of the country. Proof of this is that there are no so-called colonial neighborhoods nor old city. Not only because of the natural disasters, but also because of the non-presence and installation of the Spanish conquistadores during their discovery of the Indies. Rather, the region was home to a homogenous mixture of indigenous tribes, there is little or no trace of them left.

Some historical sites highlight some footprints and other objects from the past. These original tribes were completely absorbed without conflict by the cultural and ethnic mix born from the encounter with the foreigners arriving on the new continent. 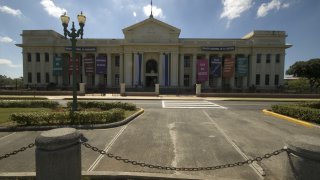 On leaving and crossing Managua, you will be pleasantly surprised by the number of lakes you will come across, small crater lakes called laguna. An ancient crater has left a valley, the Ticomo valley, the lakes or lagoons of Asososca and Nejapa are down there. 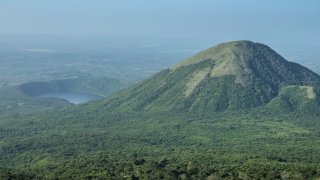 Managua has four lagoons that are freshwater reserves. The Tiscapa lagoon, for example, is a nature reserve in the city! The Asososca lagoon, mentioned above, is considered to be the largest source of safe and drinkable water. The last one is called Acahualinca, to the northwest, and is the shallowest.

Managua is located on a line of faults and ancient volcanoes, experts regularly announce major earthquakes, one more violent than the others every half century according to some.

The only negative point of Lake Managua is its pollution. Since the beginning of the 20th century, dirty water and certain chemicals have been dumped there. Fortunately, in 2009, a new drainage system and a redesigned sewerage system facilitated the beginning of its decontamination. The fauna and flora are thus out of danger and the installation of a treatment plant has allowed the implementation of a real clean policy in the city. It is the largest decontamination system set up in Central America.

As you will have understood, Managua is a green city in the true sense of the word, its tropical climate and its waters have facilitated the fertility of the soil, many species of trees dot some private gardens or parks. During the rainy season, Managua is lush. It is not uncommon to come across beautiful animals in the patios of the hotels located a short distance from the airport.

Long before the arrival of the Spanish settlers, traces of indigenous communities were found on the shores of Lake Xolotlán, and are believed to be more than 10,000 years old. Traces of human footprints dating back 2,000 years were found by chance in an old neighborhood of the city that borders the lake. All this historical heritage is also highlighted in the Museum of the site of Huellas de Acahualinca.

The history of the city of Managua, originally a simple fishing village by the lake, began at the end of the 18th century. While King Ferdinand VII of Spain declared in 1819 the city as “loyal villa of Santiago de Managua” to thank it for its extreme loyalty to the Iberian government, a great independence movement was born, as in many other Central American countries, which would culminate some twenty years later. From 1846, Managua is considered a true city, a town. It was then called Santiago de Managua. In 1852, it officially became the capital of the country, putting an end to the quarrel between the rival cities of Granada and León. Four years later, Managua was occupied by pirates, William Walker and his freebooter were based in a large Managua presbytery, on the current site of the Palace of Culture, a place privileged by its access to the lake, Managua is central. The Mercenaries of Walker are pushed back towards Granada the same year. The latter proclaimed himself president of Nicaragua in 1857. His reign did not last long, he was forced to leave the country. The freebooter days in Nicaragua are over!

Since then and for about thirty years, there has been a succession of conservative governments. Managua then experienced a certain stability and significant urbanization accompanied by the development of infrastructure and services that were halted by the great floods of 1876 and 1885.

July 1893, General Zelaya Lopez entered the capital after the coup d’éclat of the liberal revolution in León, in the north. He entered the city on the day of the celebration of the city’s patron saint, Santiago, the street he took is now called “Calle del Triunfo”. He ruled Nicaragua until 1909 with a firm, authoritarian but progressive hand. 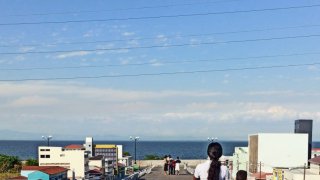 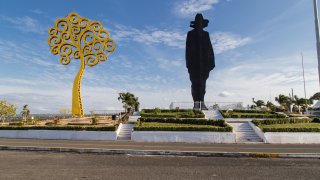 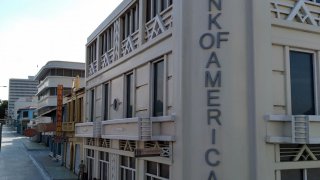 A jump of a few years, in the beginning of the 20th century and here we are at the period between two wars, the end of the Roaring Twenties. The earth is dancing and Managua is still suffering from earthquakes. On March 31, 1931, Managua trembles, the city is partially destroyed. What was left was hit in 1936 by a huge fire. All the old buildings, often made of wood and mud, are on the ground. The wooden frames and clay tiles did not resist the tremors and flames.

The 1972 earthquake was even more terrible: 6.2 according to the Richter scale felt in the middle of the night, more than ten thousand dead and a partial destruction of the city.

Between 1936 and 1979, Managua was reached more than once in its pulpit, but each time it was quickly rebuilt, as the city’s architectural capernaum still shows us today. Before the Seventies, Managua could be considered as a modern city. The family of the dictator Somoza had many new government buildings, large centers and universities erected. It even became the most developed city in Central America. 1970 was a pivotal year for Managua. When we talk about this period, we refer to Managua as Antigua ciudad, or the old city.

The city was then once again devastated, this time by Man. 1979, it is the revolution in Nicaragua! Somoza’s regime and its supporters, the contras, are going to fall. A rebellion that had begun ten years earlier ended up wearing Managua down and partially destroying it once again.

Fate came crashing down in 1998 with Hurricane Mitch! The long-awaited economic recovery did not come. Managua is still considered a major capital of the greater region, and continues to be an actor and observer of the historical changes taking place in Nicaragua.

What to do in Managua?

The city of Managua is not of great tourist interest. The various earthquakes that destroyed the city and the lack of preservation of its history do not make it a very attractive capital. However, you will be able to get a first glimpse of the atmosphere of the city and the country as you travel through it. 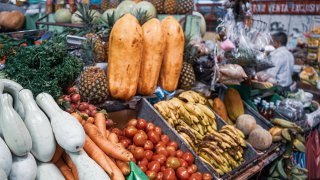 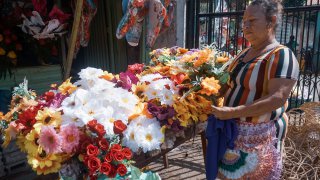 You can also spend half a day there to discover the following places : 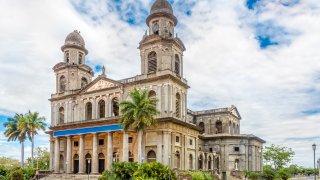 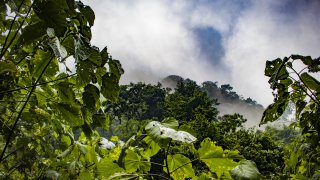 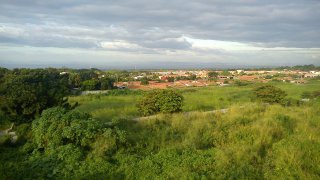